Manual setting and NC programming is needless for machine operators

Flexible, efficient, and “totally trustworthy” part set-up taken to a new level with probing routines programmed in a CAM environment - Sikorsky supplier Alp Aviation shows how to do it.

Production engineers at Alp Aviation don't just follow instructions; they take personal responsibility for every aspect of a customer's part from start to finish. They can achieve this because Alp recognises how important it is to use highly flexible and efficient production techniques. One of the most important developments recently is the introduction of Renishaw's Productivity+™ software, enabling Alp to create and test routines in a CAM environment, for the Renishaw part-setting probes fitted to all 50 of their machining centres. “Alp has to be a centre of technical knowledge, and the key to that is the communication and relationships between my employees” – Şenay İdil, General Manager, comments on how he has created the perfect culture for his staff to manage the production processes.

When you speak to the engineers themselves, it is clear that they share the same enthusiasm for best practice – “We looked at the whole production cycle time and in some cases were able to reduce it by up to 50%” says Cenk Akin, Engineering Team Leader. He continues, “Productivity+ software and Renishaw part setting probes have made this possible. The benefits not only include time and cost savings; we can also totally trust the process, since any chance of machine operator error has been removed. Process repeatability has improved – we've achieved a higher level of gauge R & R results by using probes with less than 1 micron repeatability.”

When a new part is introduced a production engineer is assigned to that part, and is responsible for all the processes throughout the production cycle. The CAD data is sent to the engineer by the customer, and a cutting process, including cutting tool selection, decided using a Unigraphics CAM system. The NC part program that Unigraphics produces is then loaded into the Renishaw Productivity+™ package, where the engineer adds probing cycles. This finished program is loaded onto the appropriate machine via the DNC system, and one part produced to test the machining and probing program before full production commences.

Productivity+ was bought in July 2007 to reduce process development time – Alp's working environment is virtually paperless and highly automated, so they couldn't afford to be manually programming the probing routines. Productivity+ uses a graphical user interface (GUI) to provide an extremely user-friendly programming environment. Alp engineers simply pick features from the CAD model, or choose parameters from dialogue boxes, to define the program. When it is complete, the required post processor is selected and the output is automatically generated, ready for loading directly into the machine.

For even greater peace-of-mind, the probing cycle is run as a simulation on the PC, picking up on any errors before it reaches the machine tool. Cenk Akin, Engineering Team Leader, explains the key benefits for Alp, “Productivity+ makes it much easier to prove out the process before going on the machine. If the machine is being used to test processes rather than producing saleable parts we are losing money.”

We looked at the whole production cycle time and in some cases were able to reduce it by up to 50%.

Productivity+ is a recent purchase, but Alp has used Renishaw part-setting spindle-mounted probes for years - all new machines are delivered with probe systems fitted. The engineers can remember how things were before Alp had Renishaw probes – “The operator would manually align the part on the table, or we would have a special, and expensive, fixture made for every variation of component. It was essential that these manual methods of setting jobs were changed – it was torture for the operators! Now the operators use simple clamping and we program the machine to use the probe to locate the part. The probe is also used later in the process, for example every part is checked before finishing cuts, and inspected on the machine once finished. Production cycle time has improved by up to 50% in some cases.

Another critical feature for us is that the probing routines automatically update machine offsets. We used to rely on the operator, who could get it wrong quite easily – a lot of scrap has been avoided with this simple feature. Accuracy has improved too – the probing is regularly cross-checked with manual gauges and we usually achieve less than 1 micron repeatability on measurements.”

The drive to reduce set-up times is particularly important to Alp, with parts that have many variants, and a strong need for flexibility. Some batches can run on a machine for a year, but some machines change batches 2 or 3 times a day with only a few components in each batch. It is particularly impressive then that Alp are close to their goal of zero set-up times, using pallet changing systems to allow operators to load components while the previous part is being machined, and the probe systems to set parts up for machining in seconds. 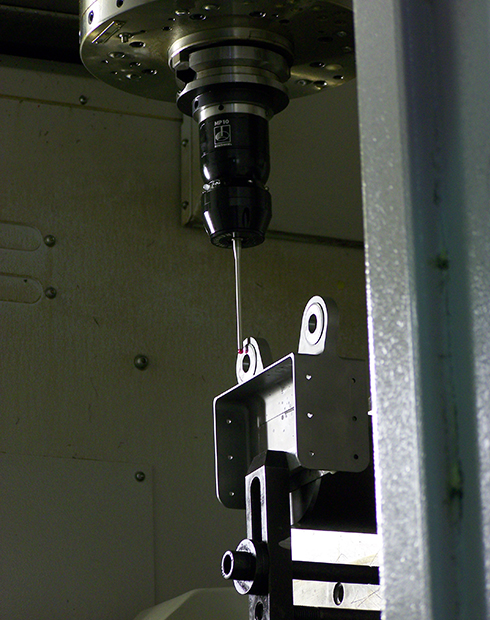 Şenay İdil, General Manager of Alp, explains how he runs the company – “We do not take on general machining work, nor do we make any aviation component that comes our way. We select customers carefully so we can build long term relationships. This is because we believe in doing work that we know will continue long-term, so a strategic growth plan must be part of the arrangement.

Our long-term approach applies to both customers and suppliers. The technology that we are talking about today, Renishaw's probe systems and Productivity+ software, are critical to that - a relatively low cost investment that is essential to run machines as efficiently as possible. In 2006 we invested $12.5M in machines tools and other systems after very careful consideration, but I wanted every machine to have probe systems. The machine specification was worked out exactly, we even asked for a special extended bed machine that wasn't in the Mazak range, and bought the first one they produced when it was introduced.

Quality is a compulsory element of aviation production, with dimensional control done in-process as defined by the production engineer, but with an independent check of 100% of the component features on the finished part.”

Alp started in 1998 as an independent enterprise, at the same time as Sikorsky were looking for suppliers. Alp started making parts for Sikorsky soon afterwards and by June 1999 Sikorsky were so impressed with the service they were getting that they bought a 50% share in the business. All decisions are made jointly with Sikorsky and Sikorsky employees are permanently employed at Alp.

Most components for Sikorsky go to the USA, with some going to the Czech Republic or to Ankara in Turkey where Alp-produced body and rear-wing parts are added to helicopters in final assembly.

Alp's customers also include Pratt and Whitney, making rear hub parts for the F135 Joint Strike Fighter, also Goodrich for their landing gear. The Goodrich job is a good example of how a new component was introduced and proven out in a fully automated way. Alp is now looking for more civilian business, in particular working with Turkish company TAI to try and secure work on parts for the Boeing 787 and Airbus A380.