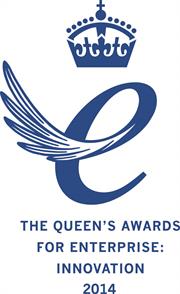 Renishaw, the global engineering technologies company, is delighted to announce that it has received a Queen's Award for Enterprise 2014 in the Innovations category for its inVia Raman microscope.

This prestigious Award has been granted for the continuous development of the inVia, with ultra-fast Raman imaging, which enables the rapid generation of high definition 2D and 3D chemical images for material analysis. This is the company's seventeenth Queen's Award since its formation in 1973 and its eighth in just eleven years.

Sir David McMurtry, Renishaw's Chairman and Chief Executive, said, “Although we have won many Queen's Awards, this is very special as it is the first to recognise our achievements outside the field of industrial metrology. We are now benefitting from a long term commitment to the development of the inVia system which has become the Raman analysis system of choice for many of the world's most prestigious research institutions, and a contributor to global research in an exciting range of advanced materials applications such as graphene. Congratulations to all the Renishaw staff around the world that have contributed to the success of this internationally acclaimed research system.”

Renishaw's inVia microscopes use a form of light scattering (Raman scattering) to analyse the chemical structure and composition of materials. It is of major benefit to academics and industrialists who use inVia to tackle analytical problems across a broad range of application areas, including: chemicals; materials science; pharmaceuticals; semiconductors; forensics; gemmology; antiquities; and green energy development, such as photovoltaics.

inVia's StreamLine™ technology enables users to generate chemical images rapidly and it has opened up new research opportunities in many fields, including biology and nanotechnology. StreamLine scans the sample with a line of laser light, collecting data from multiple points simultaneously. This prevents sample damage and gives shorter analysis times. StreamLine is made possible by a Renishaw-developed motorised sample stage, which provides fast, accurate motion, and enables the imaging of both small and large areas. StreamLine's performance is significantly superior to previous imaging techniques, allowing users to improve efficiency and reduce costs.

The Queen's Awards for Enterprise are made each year by Her Majesty The Queen, on the advice of the British Prime Minister, who is assisted by an Advisory Committee that includes representatives of Government, industry and commerce, and the trade unions. The Awards are given solely on merit and competition is fierce. The number of Awards presented each year is not pre-set and depends on the quality of the applications received.