At the Tremec Queretaro plant, near Mexico City, transmission systems are produced for Daimler, Volvo, GM, John Deere and CNH. Tremec decided that its manufacturing process could be improved considerably, since the process control of parts was taking far too long. With a new Daimler gear project it decided to use Renishaw Equator gauges to take a different approach during grinding and green gear turning. These cells produce 550-600 gears daily, all for export to the Daimler plant in the United States.

Previously, after each stage of production, some features were inspected in the quality room, taking around twenty minutes on average. For the best accuracy, more than an hour could be lost waiting for the part to ‘soak' to the quality room temperature prior to measurement. With the Equator gauges, alongside the machines, this was reduced to two and a half minutes. Tremec uses Equator systems for gauging after the turning phase, where each Kuka robot loads and unloads two Mori Seiki lathes, with one in three sample gauging, followed by operators updating tool offsets when necessary.

One of the production areas is dedicated to Daimler parts, where Tremec produces gears in cells using turning and grinding processes. However, at the start of the project it took a close look at its usual methods of measuring parts, concerned that conventional practices would result in a very long total manufacturing time.

“When the Daimler project began, we started looking for other process control systems to improve on our previous approach,” explains Engineer Andrés González, Head of Service Quality and Gauges at Tremec. “We attended industry conventions and we saw the Renishaw Equator gauge, a device that we thought could bring us benefits. We investigated how it worked and became particularly interested in its flexibility to adapt to the needs of the project”. 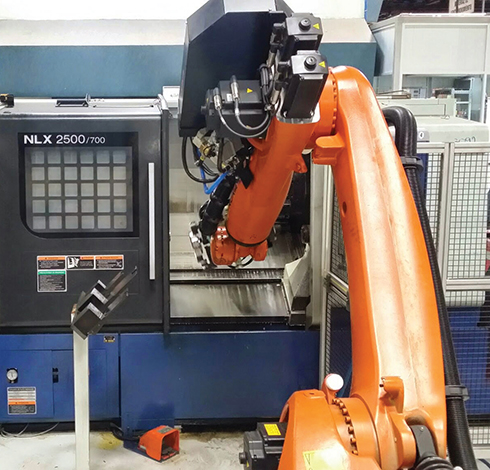 At the moment Tremec has six Mori Seiki lathes, two cylindrical grinders and four Kuka robots, producing twenty-five different helical gears and double-cone gears. A cell consists of two Mori Seiki lathes, which are three- or four- axis machines, a marker, a part detector, the robot and the Equator gauging system. One part in every three produced is selected for gauging. With diameter and height data from the Equator gauge, operators update the tool offsets on the lathes.

The Equator systems were supplied by the Renishaw distributor in the Bajío Region, Conmed (Control and Measurement), with the advice of Conmed's Jesús Marañón and his team, who also developed the first programs. When they analysed the existing shop-floor processes they realised that only basic features on the parts were being gauged, but to check an important diameter operators had to take the parts to the quality room and use the Co-ordinate Measuring Machine (CMM).

“When we installed the Equator gauge, which can be programmed in a similar way to a CMM, we were able to measure all the features, including the diameter, in the production cell and it was no longer necessary to take parts to the quality room. Now we perform this gauging at the machine. This is definitely one of the greatest advantages”, said Engineer González.

With typical workloads, doing a measurement like that in the quality room takes around 20 minutes on average, plus part soaking time in the quality room environment. With the Equator system at the machine Tremec has reduced such gauging tasks to two and a half minutes. 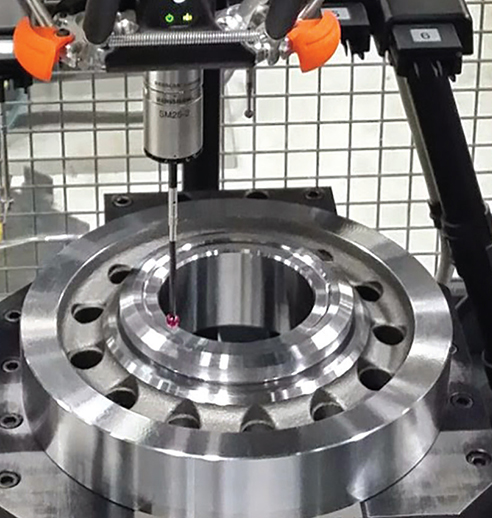 By analysing our customer's specifications, looking at the features to be gauged and controlled, we realised that we were going to cut down on the number of devices, as the Renishaw Equator can gauge everything - distances, dimensions and diameters.

Expanding Equator use to other areas

After the initial successful project, Tremec realised that since Equator gauges could be used on the shop floor and had both flexible and comprehensive capabilities, it could also work in many other processes.

Tremec decided to use the Equator system in the green gear turning area, where it has implemented it for several different double-cone gears around 200 mm or 8 inches in diameter, as it saw that the Equator would be capable of gauging the more complex features on these parts. “In these cells we gauge diameters, distances, angles, and the correlation of run-outs and form error. We planned to do this in 2 phases: phase 1, which was 10 part numbers, and phase 2, another 10 part numbers. Phase 1 allowed us to take a different look at our whole process,”

“In the past, we gauged the part features using a mixture of hand tools, like Vernier calipers, along with a measuring table. With the Equator system, we gauge the heights in the same program as the diameters, and in some cases, the angles of the chamfers. It has really helped us to improve the gauging and production process”, explained Engineer González.

In a second stage Tremec has more plans for Equator gauges. “There is another phase we will be implementing: the inner diameters and the run-outs or warps, on both diameters and faces”, added Engineer González.

The introduction of Equator is only the first part of the plan. With three Equator systems already running in fully automated cells the next stage, to be completed this year, is to have all thirteen Equator gauges installed in robot cells. The other ten are currently being manually loaded. “This is one of our main objectives: to implement automated measurement”, said González.

The Equator gauging system is a shop-floor inspection device, which can be placed alongside machine tools, and can cope with changes in temperature while maintaining high levels of accuracy, exactly what the company needed to improve its inspection. It also provides other benefits, such as displaying part measurement data, along with history and trends. Data can be recorded for traceability and analysed using the Process Monitor function, all within the software on each Equator gauge, another key capability Tremec needed.

“Most of our existing devices display gauging results for each part, but they require additional software to record and analyse the data,” said Engineer González. “The Equator gauge however gives us a complete and comprehensive alternative, which is what we were looking for, and that is why we chose this system. By analysing our customer's specifications, looking at the features to be gauged and controlled, we realised that we were going to cut down on the number of devices, as the Renishaw Equator can gauge everything - distances, dimensions and diameters.

He continued, “It is different however to a CMM, because the Equator uses a comparison method. That is, there must be a calibrated master part (nominally identical to the production parts and produced in the same material – in fact it is usually the first production part), which we measure on a CMM. It makes use of the CMM's certified traceability to produce a file of measured ‘calibration' data which is then used on the Equator every time the master part is used to ‘zero' the system, giving us certainty of measurement”.

Tremec and the metrology teams

Tremec was created in 1964 to produce manual transmissions for heavy, light, commercial and passenger vehicles. Now, it focuses on designing and manufacturing torque transfer solutions for the automotive, agricultural and military industries. Among the products manufactured are manual and automatic transmissions, dual clutch transmissions, gears, shafts, clutches, synchronizers and integrated clutch systems with associated control software.

Tremec is a Mexican company, with other facilities in the United States, India and Belgium. The Belgian plant was set up five years ago for product development. At the Escobedo plant in Mexico, much of the production is devoted to companies such as Eaton, Navistar (its oldest client in that plant), CNH and Parker.

Equator gauges are a key part of future strategy

In the cells where it uses the Equator systems, Tremec produces 550-600 gears daily, all for export to a Daimler plant in the United States. This plant also houses production cells for Volvo (gears), GM (transmissions), John Deere and CNH parts. 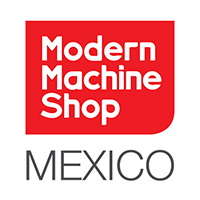