Injection moulding allows plastic products to be produced in complex and intricate detail, often in sizeable production runs, with repeatable tolerances and high surface quality. Mould tools must be designed to perfectly replicate the 3D design in the minimum cycle time. Cooling of the plastic part as it solidifies within the mould tool is a critical factor, affecting both the cycle time and the quality of the part.

I explored the use of additive manufacturing (AM) to produce efficient mould tooling in my article Conformal-cooled mould tools - how to cut cycle times and boost part quality. Now in this article, I look at how these techniques have been applied by leading cleaning systems provider Alfred Kärcher GmbH & Co. KG to boost production of one of their best-selling pressure washers.

Before we look at the Kärcher application, let's recap the principles of conformal cooling and look at the beneficial impact of AM on mould tool design. 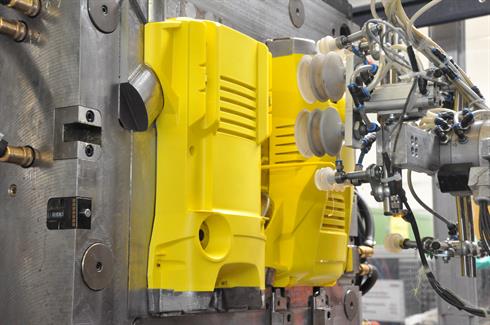 Kärcher casing components being removed from their injection mould tools

Why use AM for conformal cooling of mould tools?

The goal of conformal cooling is to reduce the temperature of the plastic part inside the mould tool quickly and evenly. The part cannot be removed from the tool until is has cooled sufficiently to detach from its mould. Any hot spots will delay part release, may lead to warping and sink marks in the part after removal, and may compromise the quality of the component surface.

Cooling is achieved by passing a fluid through channels inside the mould tool so that the heat is conducted out of the plastic part, through the metal tool, and away in the fluid. The speed and evenness of this cooling effect is driven by how closely the fluid channel tracks the surface of the tool, and the rate at which cooling fluid passes through it. We also need to ensure that our mould tools are reliable, avoiding dead-spots in the coolant flow where sediment can gather and create blockages.

AM gives mould tool designers the freedom to design complex cooling channels that closely follow the component surface, whilst maximising laminar flow and eliminating dead-spots that might otherwise clog up over time.

In conventional moulds we have cross-drilled and plugged cooling channels in limited regions of the part like this: 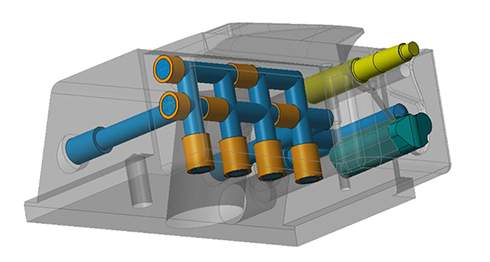 By contrast, with AM we can design contoured channels that closely follow the surface of the tool like this: 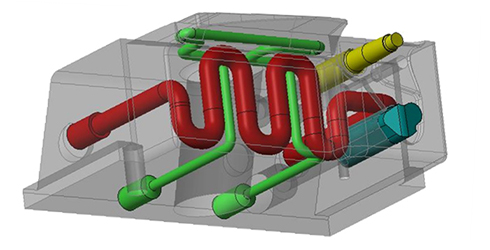 Kärcher makes pressure washers that are sold globally, with more than two million of their K2 Basic model leaving the factory in Obersontheim each year. The striking bright yellow casing is manufactured in two halves on six injection moulding machines.

The company needed to increase productivity from these moulds to keep up with growing demand. Using conventional cooling, the total cycle time was 52 seconds, of which 22 seconds was required to cool the part from its melting temperature of 220 °C to the de-moulding temperature of 100 °C.

The mould tooling for these parts is substantial and complex, comprising a large cavity and numerous cooled inserts. The original design is shown below.

The original cooling system for the inserts contains several separate cooling circuits as shown in the image below. A total of 10 litres per minute of cooling water is used.

Thermography of the ejector side of the original mould tool shows the wall temperature at the end of the 22 second cooling cycle. We can see significant variation in temperature across the mould, with hot spots that may compromise the component as it is removed from the mould. 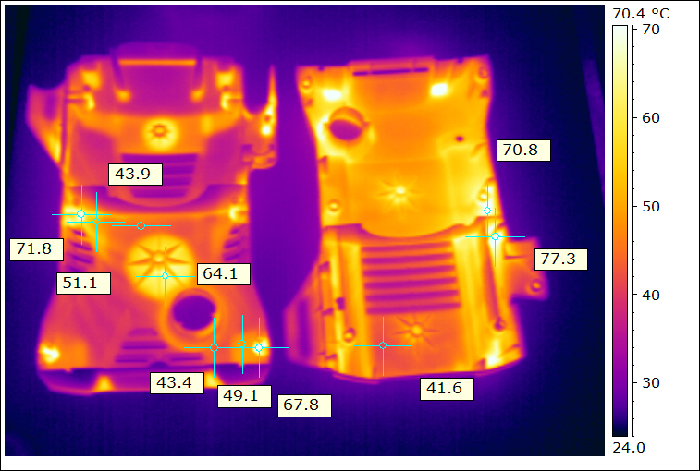 The first step to speeding things up is to simulate the mould tool behaviour. In particular, the hotspots need further analysis as they are responsible for the long cooling time. A simulation of 20 cycles was undertaken, including an analysis of the wall temperature. The modelled temperatures show good correlation with the thermography. 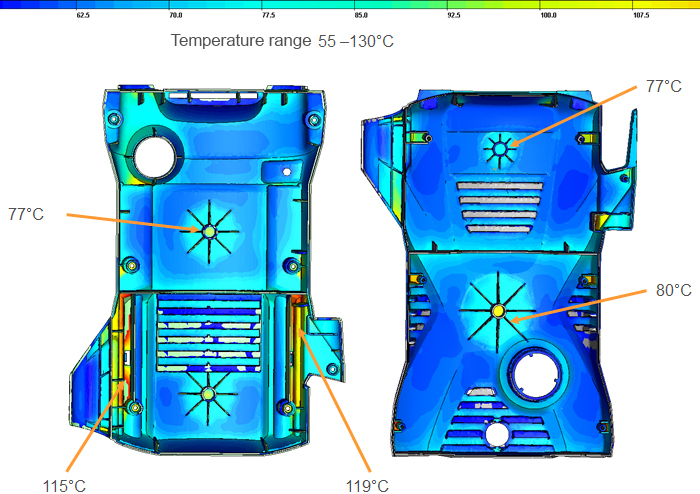 Now that we have a model of the current cooling design, we can make design changes to improve things, focussing on the hot spots. In this case, a part of the solution is to add extra conventional cooling channels into the beryllium-copper mould plate on the nozzle side.

Next we develop new AM inserts for the ejector side of the tool, featuring conformal cooling to carry away the excess heat. The image below shows these additional 4 mm diameter cooling channels applied to the problem regions:

In one region where there was insufficient space to include more cooling channels, Kärcher made improvements to the product design to alleviate the problem.

When we simulate the thermal behaviour with these new cooling systems in place we see significant improvement in the uniformity of temperature across the part, after a much shorter cooling cycle:

These simulated improvements are borne out by the thermal imaging of the new mould after a shortened cooling cycle of just 10 seconds: 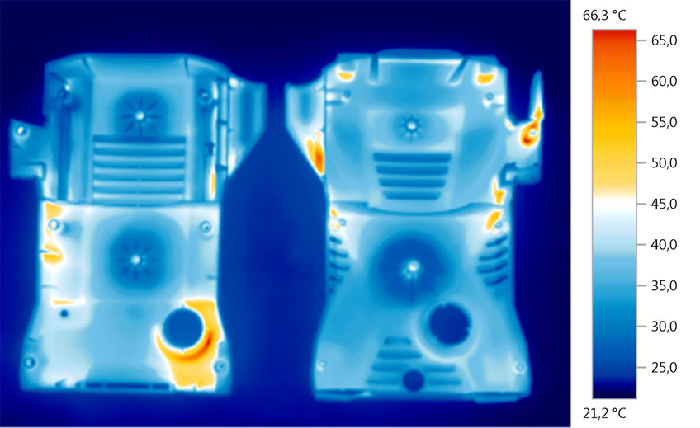 The new inserts are made using AM to create the complex channels. Some are built entirely additively, whereas others are 'hybrid' components which build up additive regions on top of machined blanks. Vacuum-brazed cores from Listemann Technology AG also formed part of the solution. The new ejector side assembly is shown below: 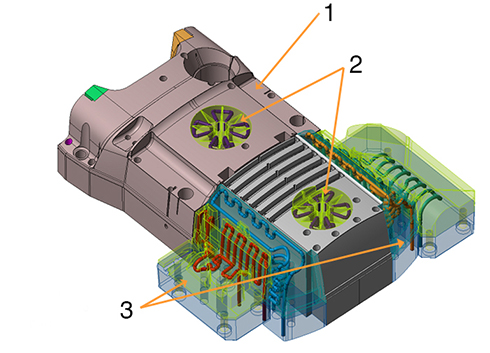 In Kärcher's application, cooling time was reduced by 55% from 22 seconds to just 10 seconds. Combined with further time savings in material feed and handling, the faster cooling helped to increase the production throughput from each tool by 40% from 1,500 to 2,100 parts per day.

Conformal cooling enables mould tools to operate faster and to produce more consistent parts. AM boosts this further by optimising heat transfer to make cooling both faster and more even.

Find out more about metal additive manufacturingContact us